What you need to know about SIBO – Part 1 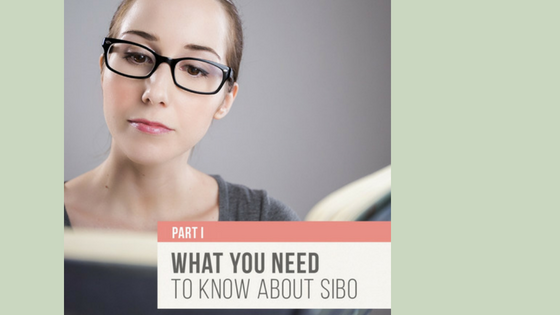 By The Healthy Gut

What you need to know about SIBO – Part 1

What do you need to know about SIBO, or Small Intestinal Bacterial Overgrowth? Have you heard of SIBO and wondered what it is? Maybe you’re experiencing digestive problems but haven’t investigated SIBO yet? In this 2 part article we’re going to shed some light on this often overlooked condition.

SIBO is the leading underlying cause of Irritable Bowel Syndrome (IBS), yet is still largely unknown by the medical community and general public alike. We’ll delve into what it is, what symptoms you can experience with it, how you get it, and what associated conditions are known to be more likely to experience SIBO, how to find a practitioner and how to test for SIBO.

Once you’ve heard of it your next question is undoubtedly going to be, ‘what is SIBO?’. SIBO is an overgrowth of normal bacteria in the small intestine. This bacteria normally live elsewhere in the gastrointestinal (GI) tract, but have overgrown in an area they’re not supposed to be in such large numbers, causing havoc. It is not pathogenic bacteria (meaning, it is not an infection), but instead is normal bacteria that has set up home in the wrong location: the small intestine.

What are the symptoms of SIBO?

Do you regularly feel bloated, have constipation, diarrhoea (or both), experience abdominal pain, have food intolerances or experience weight gain/loss? If so, you may have SIBO.

For many people their SIBO symptoms can creep up on them. Over a period of time your digestion can become more problematic and you may start to notice that certain foods make you feel pretty ordinary. It is also possible to experience a sudden onset of symptoms following food poisoning, abdominal surgery (such as C-sections, appendectomy, laparoscopy, etc) or a prolonged period of antibiotic treatment. Our podcast with Dr Allison Siebecker on understanding SIBO is a great place to start if you think you may have it. Listen here.

The common symptoms experienced by those with SIBO include:

What are the common causes and risk factors for developing SIBO 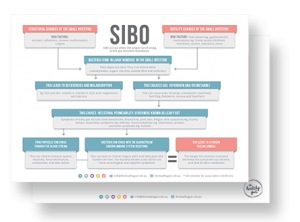 Before we look at the risk factors, it’s important to understand the underlying causes of SIBO. There are many risk factors but only a few causes.

The two most common underlying causes of SIBO are either a structural or functional abnormality of the small intestine.

There are many risk factors that can lead to the migrating motor complex not working properly or there being a structural issue with the small intestine, ultimately leading to SIBO. These include:

What conditions are commonly linked to SIBO?

There are a number of conditions associated with SIBO.  If you have one or more of the following conditions, your risk of also having SIBO is considerably higher than the normal population.

How can I find a SIBO practitioner?

If you’ve read through the symptoms and risk factors and realise they sound just like you, what’s next?  It is important to be tested for SIBO before commencing any treatment. SIBO can be a chronic and often complicated condition to treat, so understanding what type of SIBO you have is important. There are two types of SIBO, methane or hydrogen dominant, we’ll talk about the differences between these in Part 2 next week.

A great next step is to take the free online SIBO quiz by SIBOTest, which gives you an indication of the likelihood of SIBO being present.  Take the quiz here.

Next, it’s important to find a practitioner who is experienced in treating SIBO. Finding the right practitioner can be the  key to finding success on your SIBO journey. It’s important to remember that we’re all on different journeys; some people will need to find someone nurturing and comforting and others will need someone straightforward and to the point. If you need help finding a practitioner then a good place to start is is the SIBOTest website where they have a list of SIBO practitioners.

The right practitioner will be someone who listens to you, shows understanding, has expertise and a depth of knowledge on SIBO, and can make you feel at ease with them. SIBO is a long-term, chronic condition for two thirds of all patients (meaning those people won’t get rid of it quickly) and the chances are that by the time you come to see a practitioner, you’ve been feeling pretty rotten for some time.  Check out our podcast on finding your dream healthcare team here.

How do you to test for SIBO?

The majority of people are tested for SIBO using a  breath test. A glucose or lactulose sugar solution is drunk, with breath samples collected every 20 minutes, measuring the hydrogen and/or methane expired through the lungs. These gases are only produced by bacteria, not us, so their presence indicates the presence of the bacteria in the gastrointestinal (GI) tract.  Depending on what time the gases appear on the test, will help your practitioner determine where in your GI tract the overgrowth of bacteria is. For instance, if there is a sharp rise early on in the test, that could indicate the overgrowth is higher up in the small intestine.

The breath test is currently considered the most reliable and non-invasive  way to diagnose SIBO, and is by far the most common way to test for SIBO. It can be conducted at home or in-clinic, making it easily accessible.  Lactulose is non-absorbable and traverses the entire length of the small intestine, whereas glucose is absorbed in the first 2-3 feet of the intestine, so can only measure SIBO that is in the top section of the small intestine. It is for this reason that testing with both glucose and lactulose is often recommended for comprehensive results.

It is also recommended that the test is undertaken over a 3-hour period, with breath samples collected every 20 minutes, to measure the gas output over a longer transverse time.  Shorter tests can be conducted, but they may provide a false negative if the SIBO is present in the lower section of the small intestine. Fructose malabsorption is often tested in conjunction as a SIBO test to determine if fructose is problematic.

An aspirate can be taken from the small intestine.  This can be performed by an endoscopy in-clinic, generally under anaesthesia.  A sample is taken and the culture is grown to determine what bacteria is present.  This test is invasive, costly and difficult to find because it requires a highly skilled medical professional to undertake the test.  For these reasons, it is not commonly used.

Stool tests can be used to determine the bacteria found predominantly in the large intestine.   Whilst useful for understanding a broader picture of GI health, a stool test cannot diagnose SIBO, as it can’t identify if there is an overgrowth of bacteria in the small intestine, as it is difficult to determine where the overgrowth is occurring. If a breath test is not an option (for instance for very young children who cannot blow into a breath test), this can be an indicative starting point until a breath test or other culture can be taken.

Bacteria and fungus produce organic acids which are excreted in your urine.  An urine organic acids test measures the level of organic acids excreted, giving you an indication that you may have a yeast or bacterial overgrowth.  However, like the stool test, it is unable to pinpoint exactly where the overgrowth is occurring, and for this reason isn’t used to definitively diagnose SIBO.

This article is Part 1 of a two part series on SIBO. Come back next week as we explore the differences between methane and hydrogen dominant SIBO, SIBO treatment options and the 5 Key Pillars to Health.

Is it the terrible two’s, or just a microbiome i

New Green smoothie recipe and it tastes like a Pin

This is so true and something I have always strugg

I've been adding some of my back log of recipes to

If you are fermenting fruit, be sure to check it o

Visit the Shop for our recommended gut healing products and services. Dismiss